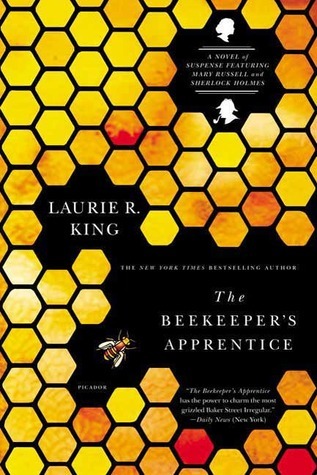 Title: Beekeeper’s Apprentice
Author: Laurie R King
Rating: 5/5 stars
Summary: Long retired, Sherlock Holmes quietly pursues his study of honeybee behavior on the Sussex Downs. He never imagines he would encounter anyone whose intellect matched his own, much less an audacious teenage girl with a penchant for detection. Miss Mary Russell becomes Holmes’ pupil and quickly hones her talent for deduction, disguises and danger. But when an elusive villain enters the picture, their partnership is put to a real test.

I have a love-hate relationship with Sherlock Holmes. I grew up with my parents quoting different famous scenes from the original books, and I loved watching and reading all the Sherlock Holmes adaptations. When I actually sat down to read Sir Arthur Conan Doyle’s stories in college, I was deeply uncomfortable with how racist they were. I don’t know why this was surprising to me; of course Sir Arthur Conan Doyle was alive in a time when British imperialism and colonialism of India were in full force, and I understand that his views were quite normal for the time. It doesn’t make it any less uncomfortable for me to read about it now, though. All this to say, I tend to like the Sherlock Holmes modern adaptations a lot more than the originals.

This book is hands down one of my favorite adaptations of the Holmes canon. I appreciated how this book was a continuation of the original canon rather than a retelling, and it was intriguing to hear about Holmes from Mary’s perspective. Mary starts off as a young girl but grows up into a young woman over the course of the novel. She is just like Holmes in that she has keen eye for detail, a sharp mind, and prefers puzzles to people. She has her own eccentricities, and can be quick to judge other people (especially poor John Watson), but Mary was a very endearing protagonist.

Mary, as a much younger and female contemporary to Sherlock Holmes, allows the book to make some interesting observations about gender roles, aging, and friendship/family. I really enjoyed these perspectives and the focus on the relationships between characters instead of simply focusing on the mysteries. I also liked how this book had multiple interconnected mysteries, each showcasing a different stage in the relationship between mentor and protege.

This book was written the same month I was born, and I often find that books written in the 80s and 90s can feel dated in terms of ideology or writing style. This book manages to feel fresh and relevant over 25 years after it was written, and that is particularly admirable.

I would highly recommend this book for any fans of Sherlock Holmes retellings, especially those who have enjoyed Brittany Cavallaro’s Charlotte Holmes series.

1 thought on “Review: The Beekeeper’s Apprentice”