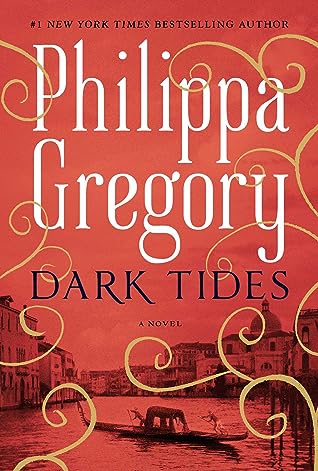 Title: Dark Tides
Author: Philippa Gregory
Rating: 2/5 stars
Summary:
Midsummer Eve 1670. Two unexpected visitors arrive at a shabby warehouse on the south side of the River Thames. The first is a wealthy man hoping to find the lover he deserted twenty-one years before. James Avery has everything to offer, including the favour of the newly restored King Charles II, and he believes that the warehouse’s poor owner Alinor has the one thing his money cannot buy—his son and heir.
The second visitor is a beautiful widow from Venice in deepest mourning. She claims Alinor as her mother-in-law and has come to tell Alinor that her son Rob has drowned in the dark tides of the Venice lagoon.
Alinor writes to her brother Ned, newly arrived in faraway New England and trying to make a life between the worlds of the English newcomers and the American Indians as they move toward inevitable war. Alinor tells him that she knows—without doubt—that her son is alive and the widow is an imposter.
Set in the poverty and glamour of Restoration London, in the golden streets of Venice, and on the tensely contested frontier of early America, this is a novel of greed and desire: for love, for wealth, for a child, and for home.

I’ll start by saying that I didn’t realize this was part of a series until after I started the book, and although the book held up pretty well on its own, I think I might have liked it better if I had the context of the first book. My main issue with the book was that I didn’t like the characters, but maybe if I’d seen their character arcs in the first book, I would have understood or empathized with them more.

This book is the first Philippa Gregory book I’ve read, and I know she’s known for romance in her historical fiction, but this book seemed to be more pure historical fiction. I don’t know a lot about the 1600s in England, but I did appreciate that this book centered every day folks struggling to make ends meet instead of the rich and powerful nobility, which I think is more typical for medieval historical fiction. I also liked that the story alternated between England and the new world of America, giving us a more global picture of the historical period. That said, I had no idea how the plot line in America was related to the main plotline, and I felt like the book could have done without it (perhaps this is something that would have made more sense if I’d read the previous book).

My main disappointment with this book was the characters. None of them are particularly intelligent, although they aren’t characterized as foolish or naive, so that was frustrating. The main instigator (I don’t think antagonist is quite the right word), Livia, was supposed to be slimy and infuriating, but I never felt as viscerally angry with her as I’ve felt about similarly manipulative and selfish characters in Robin Hobb or Ken Follett’s books. Alinor was supposed to be a wise matriarch, but she had very little role in this story and was extremely passive aside from a few sharp one-liners directed at her daughter. Alys, I think, was supposed to be a competent and intelligent women who has the wool pulled over her eyes, but she came across as a naive and foolish woman instead. James was similarly just not that interesting, I think I was supposed to feel pity and disgust for him but I didn’t feel very strongly about him at all. Ned was an interesting character and I enjoyed reading about his perspective, I just didn’t think his story was relevant to the main plot. The only character who really takes action to help her family is Susan, which doesn’t even happen until the last third of the book. Although I liked Susan, the end of her story arc left a sour taste in my mouth.

This is a mild, sort of spoiler, so I’ve left it in white text so you can highlight it if you’d like to:

I felt like queerness in this book also wasn’t explored very well. We never really understand if the two characters actually love each other or if one is just using the other (I’m leaning towards the latter). I also got really annoyed with the “I love you like a sibling” business.

Overall, I didn’t enjoy this book very much, but I think people who read and enjoyed the first book in the series may enjoy this more than I did. I am still interested in Philippa Gregory’s other books, maybe I will find those characters more compelling.

A free e-ARC was provided by the publisher via Netgalley in exchange for an honest review.