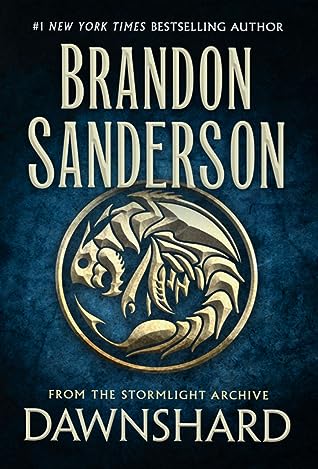 Title: Dawnshard
Author: Brandon Sanderson
Rating: 5/5 stars
Summary:
When a ghost ship is discovered, its crew presumed dead after trying to reach the storm-shrouded island Akinah, Navani Kholin must send an expedition to make sure the island hasn’t fallen into enemy hands. Knights Radiant who fly too near find their Stormlight suddenly drained, so the voyage must be by sea.
Shipowner Rysn Ftori lost the use of her legs but gained the companionship of Chiri-Chiri, a Stormlight-ingesting winged larkin, a species once thought extinct. Now Rysn’s pet is ill, and any hope for Chiri-Chiri’s recovery can be found only at the ancestral home of the larkin: Akinah. With the help of Lopen, the formerly one-armed Windrunner, Rysn must accept Navani’s quest and sail into the perilous storm from which no one has returned alive. If the crew cannot uncover the secrets of the hidden island city before the wrath of its ancient guardians falls upon them, the fate of Roshar and the entire Cosmere hangs in the balance.

I feel like it’s been forever since I posted a review! I read a lot of really good books in December, so I’ll do my best to put up at least short reviews of all of them. Since I’m still neck-deep in Rhythm of War and I’ve got the Stormlight Archive on my mind, I thought Dawnshard would be a great place to start. Mild spoilers for the characters in the Stormlight series, I suppose, but I will try my best not to spoil anything major!

Dawnshard takes place after Book 3, Oathbringer, and features a character we’ve only gotten to see in interludes so far. Last we saw Rysn, she had taken a fall and become paralyzed, but had also been entrusted by her mentor to captain a ship. As an able-bodied person, I can’t speak to how good the disability rep was in this book. I did appreciate that Rysn’s frustration with how others treated her was due to how they made her feel othered and not due to her own feelings of inadequacy after her injury. I also really liked how technology was shown to be a tool to make the world more accessible without any shame or stigma associated with asking for or using these new technologies. Rysn demonstrates on multiple occasions that she is a savvy trader and incredibly insightful, proving that not all heroes are warriors who wield swords or have special powers.

I also loved the secondary characters in this novella. Nikli was mysterious, and I really enjoyed the expansion of cosmere lore as we learn their back-story. Cord was also a favorite of mine; she is so used to being the foreigner in the group, overlooked and misunderstood, but ends up being an invaluable member of the team. I really liked how direct and unwavering Cord was about her goals, despite what others told her. And of course, Lopen and his antics made me smile.

I don’t want to say literally anything about the plot (or about the titular Dawnshard), but I will say that this novella made some huge reveals about the world of Roshar and how it connects to the greater cosmere. It was an incredibly satisfying novella (novel? At over 200 pages I’m not really sure what it is!) with a cast of unlikely heroes, and I loved it.