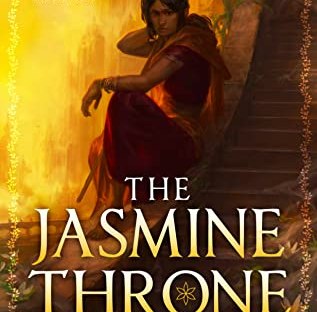 The Jasmine Throne by Tasha Suri is one of my favorite books of the year, and it’s brutal, dark, and complex … kind of the opposite vibe as an animated TV show. Still, I couldn’t help but notice some similarities between the complicated yet lovable characters in The Jasmine Throne and the She-Ra reboot 🙂

Very powerful and completely badass, both Bhumika and Glimmer are expected to behave a certain way because of their social class/family but secretly really just want to fight. Both of these strong women aren’t above fighting family if they find themselves on opposite sides of a conflict.

Priya and Adora are the heroes, the special ones who are uniquely equipped with the power to make big changes in their worlds. Although Priya is a lot more morally ambiguous than Adora, they both will do a LOT to take care of their friends and the people the care about despite not thinking very highly of themselves.

I mean, it’s a little too easy but Catra and Adora are supposed to be on opposite sides but still have a connection, just like Malini and Priya. Malini feels just as helpless as Catra I think, they both struggle with being considered “monstrous” and feeling deserving of love or positive relationships. Toxic family that left a lot of emotional scars, it’s all there.

Maybe Shadow Weaver is a bit of a harsh comparison for Ashok, but they both are willing to hurt other in the pursuit of what they think is best. Somehow Ashok is respected and is in a position of power despite an extremely flexible moral compass, and can justify anything to himself, much like Shadow Weaver.

They’re both sweet, brave, and strong characters with a semi-secret identity who are always there to support their friends. Loyalty above all else!

Rukh is the perfect example of an innocent, young character being thrust into a pretty harrowing situation and trying to make the best of it, just like Kyle. Both characters are a lot stronger than most give them credit for, and are both especially endearing 🙂

The Jasmine Throne is out tomorrow!! I hope this post piqued your interest and that you’ll check it out, I loved this book!