Welcome to my stop of The Lonely Pages Book Tour for The Shaadi Set-up by Lillie Vale! I’m so excited to share my thoughts about this book with you, and I hope it will bring you some joy in these world-is-on-fire times…it certainly made me laugh over the last few weeks and made me feel seen in a way that I haven’t really experienced before. 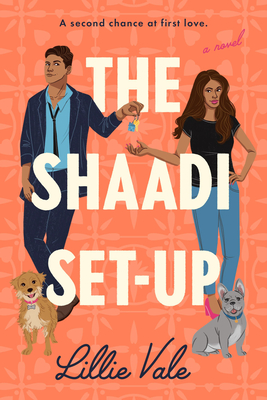 Title: The Shaadi Set-Up
Author: Lillie Vale
Rating: 4.5/5 stars
Summary:
In this witty and heartfelt rom-com debut for fans of Jasmine Guillory, Emily Henry, and Tessa Bailey, an Indian-American woman signs herself and her boyfriend up for a matchmaking site to prove they’re a perfect match, only to be paired with her ex instead.
High school sweethearts Rita Chitniss and Milan Rao were the golden couple, until the day he broke her heart. Now, six years later, Rita has turned her passion for furniture restoration into a career and has an almost-perfect boyfriend, Neil. The last thing she needs is for Milan to re-enter her life, but that’s exactly what happens when her mother, an unfailing believer in second chances, sets them up. Milan is just as charming, cocky, and confident as he was back in school. Only this time, he actually needs her business expertise, not her heart, to flip a hard-to-sell house for his realty agency.
While Rita begrudgingly agrees to help, she’s not taking any risks. To prove she’s definitely over him, she signs herself and Neil up on MyShaadi.com, a Desi matchmaking site famous for its success stories and trustworthy enough to convince everyone that she and Neil are the new and improved couple. Instead, she’s shocked when MyShaadi’s perfect match for her isn’t Neil…it’s Milan. Ignoring the website and her mother is one thing, but ignoring Milan proves much more difficult, especially when she promises to help him renovate the beach house of her dreams. And as the two of them dive deeper into work—and their pasts—Rita begins to wonder if maybe her match wasn’t so wrong after all….

I really enjoy reading books about South Asian women because it’s such an incredible feeling to see people who look like you portrayed in a way that isn’t the usual quirky-best-friend or nerdy-IT-guy trope. Most of the books I’ve read featuring Desi girls have been YA, which is great and fun, but this was the first adult book I’d read that really hit home. As the author said in her acknowledgements, she wrote this story for all the diaspora folks because that was her experience growing up and she wanted to write a story that reflected that. It might have hit a little too close to home, since Rita and I are both twenty-somethings and our parents really think it’s time for us to get married haha

I thought this book was generally light and fun, but there were a few parts of it that made me tear up. The premise is definitely a little wild (did Rita really think she could force a dating website to match her with her current secret boyfriend? I feel like she should have just Photoshopped a MyShaadi match lol). We’ve also got meddling parents who are really keen on getting their kids to work together and see what happens…never mind that they had an ugly breakup ten years ago. We also get a peek into some of the family drama, like Rita’s mother once being in love with Neil’s dad when they were young, which is why Rita can never tell her mom she’s dating the son of the guy who broke her heart. Although that part of the story could have swerved into melodramatics, I loved that it just deepened the connections between Rita, her mother, and her grandmother as they navigate what it means to love someone and be happy. Rita’s Aji was a great character, she had a lot of hilarious zingers but she also had some of the most poignant lines in the book.

I love that Rita, Milan, and Neil are all South Asian but they are not defined by that. Rita is a free-spirited artist and interior designer, Milan is a hotshot realtor, and Neil is a mama’s boy who just wants to find a nice girl and settle down. Sure, they have particular pressures from their parents about finding someone since they’re “at a certain age” and they love eating Desi snacks, but they aren’t pigeon-holed into only that aspect of their identity. One character that I have mixed feelings about is Raj/Rajvee. They identify as genderfluid, and the text explicitly says that they use he/she/they pronouns and use gendered outifts/presentation to cue people into whether they want to be called Raj or Rajvee, but in the entire book, the author only ever used she pronouns. I felt like this tokenized this really bubbly and awesome character into being “the queer one”, so although I appreciate the inclusion of a genderfluid character, I think they could have had a larger role in the story and I would have loved to see their full expression of gender identity.

Overall I really enjoyed this book, which is mostly a second-chance romance with a nice big dose of complicated families and friendships. I would definitely recommend this book, especially if you are looking for more diverse rom-com books to read!

Lillie Vale is the young adult author of ALA’s 2020 Rainbow Books List selection Small Town Hearts and Beauty and the Besharam (forthcoming from Viking Children’s). She writes about girls fighting back, secret-keeping and between-places, the ways in which we’re haunted, food as a love language, and all the feels. Born in Mumbai, she grew up in Mississippi, Texas, and North Dakota, and now lives in an Indiana college town. Her debut adult romantic comedy, The Shaadi Set-Up, releases in 2021. Find her on Twitter @LillieLabyrinth and Instagram @labyrinthspine, or visit her website lillielabyrinth.com.

Check out the other Tour Stops!

1 thought on “Book Tour: The Shaadi Set-Up by Lillie Vale”