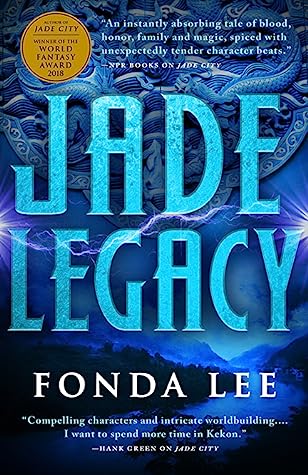 Title: Jade Legacy
Author: Fonda J. Lee
Rating: 5/5 stars
Summary:
Jade, the mysterious and magical substance once exclusive to the Green Bone warriors of Kekon, is now known and coveted throughout the world. Everyone wants access to the supernatural abilities it provides, from traditional forces such as governments, mercenaries, and criminal kingpins, to modern players, including doctors, athletes, and movie studios. As the struggle over the control of jade grows ever larger and more deadly, the Kaul family, and the ancient ways of the Kekonese Green Bones, will never be the same.
The Kauls have been battered by war and tragedy. They are plagued by resentments and old wounds as their adversaries are on the ascent and their country is riven by dangerous factions and foreign interference that could destroy the Green Bone way of life altogether. As a new generation arises, the clan’s growing empire is in danger of coming apart.
The clan must discern allies from enemies, set aside aside bloody rivalries, and make terrible sacrifices… but even the unbreakable bonds of blood and loyalty may not be enough to ensure the survival of the Green Bone clans and the nation they are sworn to protect.

It’s been a while since I posted anything on the blog, I’ve been working insane hours and not feeling well for the past few weeks but I’m back in business. Even though I was really busy, I was reading pretty consistently (if slowly), and it took me nearly two weeks to finish Jade Legacy but it was an incredible journey and I’m glad I got to savor it.

It’s no secret that I love the Green Bone Saga, I’ve been recommending the series to all my fantasy-loving friends and it’s made a few appearances on the blog as well. The thing that I love about this series (besides the impeccable world building and the characters) is that every book raises the stakes and the scope of the story to a point that seems both natural and unimaginable given the scope of the previous book. Jade City takes place over a couple of months, Jade War takes place over a couple of years, and Jade Legacy takes place over a couple of decades. We go from focusing on the Kaul siblings and their mafia-esque lives in the city of Janloon, all the way to a multi-generational story that encompasses international politics, trade agreements, rebellion, kidnappings, murder plots, and more.

If you’ve read the first two books, you already know that Fonda Lee pulls no punches when it comes to our favorite characters. Bad things happen to good people, and sometimes you have to deal heartbreaking collateral damage even when you know you made the right choice for your family or those under your care. I really liked how Fonda Lee gave every single challenge enough time to linger and change the way characters think or interact with each other. Even though this book is action-packed, we really get to see the consequences and long-lasting emotional impact of all of it.

Another thing I really liked about this series is how strong the bond is between the Kaul siblings, their families, and their clan. They really will do anything to protect one another, and I admired the fierceness of their love for one another even when they didn’t always agree on things. It’s really interesting to see the difference in philosophy between Ayt Mada of the Mountain and the Kauls of No Peak Clan. Ayt Mada rules with an iron fist and a reputation for ruthlessness, and while Kaul Hilo also has a bloodthirsty reputation, he has something more that Ayt Mada will never truly have: the guidance and support of his family. Even though you really want to hate Ayt Mada, you can’t help but respect her, and even at times empathize with her and the tough choices she makes.

A free ARC was provided by the publisher in exchange for an honest review.